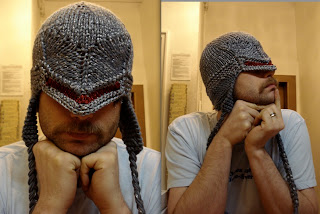 It took several months longer than I wanted, but the Cylon Centurion Hat pattern has been rewritten!  It is longer (the pattern, not the hat), and probably looks more complicated, but it should make more sense and actually make the hat without trying to divine what I was attempting to communicate in the first version.  I was very, very, very new to pattern writing and using relatively unfamiliar-to-me shaping when I wrote the original pattern.

The updated pattern has been uploaded to my Ravelry store, still for free.
download now

If you spot any errors please let me know.  If you have any questions about construction, don't hesitate to ask!
Wonderfallz(at)gmail(dot)com or message me on Ravelry

And check out who's face is uncovered.  By finishing the pattern, I paid the ransom (to myself, god, I'm such a nerd), and the digital post-it over Nathan Fillion's face has been removed.
It's like my very own slow moving, lame video game.

Posted by Wonderfallz at 9:07 PM